The Gulf of Carpentaria (the ‘Gulf’) spans Queensland and the Northern Territory in northern Australia and comprises approximately 3500 km of coastline. The Gulf is a large shallow embayment that includes the Arafura Sea to the west and north, and Torres Strait to the northeast. The Gulf is extremely remote, sparsely populated, and few coastal developments exist. The waters of the Gulf experience high turbidity and seasonally high nutrient levels which support an array of benthic and pelagic species. Accordingly, it is a haven for a wide variety of marine and coastal life and includes six of the world’s seven marine turtle species, and four sawfish species, many of which are in decline globally. Although the Gulf is highly remote and should be unspoiled, the coastline is littered with fishing nets (ghost nets) which drift on monsoonal and trade wind currents from outside Australian waters. Over 95% of ghost nets entering the coastal regions of northern Australia originate from South East Asia.

The Sunshine Coast is located in South East Queensland, Australia, approximately 100 kilometres north of Brisbane (the State’s capital). The region is diverse with over 200 kilometres of coastline, coastal urban centres, waterways, national parks, state forests, rural areas and scenic mountains. With a diverse range of geographical, geological and topographical features, the Sunshine Coast is becoming increasingly renowned as a centre of biodiversity richness. The region is diverse in natural resources with unique flora and fauna. Key features of this diversity are the most significant loggerhead turtle population in Australia. In fact, Moreton Bay Marine Park, (which stretches 125 km from Caloundra on the Sunshine Coast to the Gold Coast) has Australia’s most extensive seagrass; mangroves and salt marsh; nursery areas for diverse fish and shell fish populations; approximately 50,000 migrating birds (of which 34 species dependent on the Bay for survival); six of the world’s seven turtle populations, and over 600 dugongs.
The Sunshine Coast is recognised as one of the fastest growing regions in Australia, with an increasing number of people moving to the region from Queensland, inter-state and from overseas. The region has a subtropical climate and its coastal regions and waterways represent complex ecosystems with unique biodiversity and high conservation value. The Sunshine Coast is also home to a number of turtle species, predominately the Loggerhead turtle (Caretta caretta) and less frequently, the Green turtle (Chelonia mydas). These turtles nest on Sunshine Coast beaches, often producing on average 100-130 eggs per individual nest. Currently, a number of threats to turtles exist. These include:
- The legal and illegal consumption/collection of turtle meat, eggs and shells.
- Incidental capture and habitat destruction associated with commercial fishing industries.
- Coastal development resulting in the destruction of nesting habitat and degradation of near-shore waters.
- Marine pollution generated from human land and marine activities.
- Climate change, which may impact on the natural sex ratios of hatchling.
On the Sunshine Coast, foxes present a major threat to sea turtles at the egg and hatchling stages. 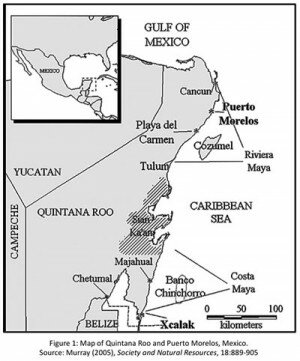 Puerto Morelos is a town situated in the middle of the rapidly developing Riviera Maya, in the state of Quintana Roo, Mexico. It has still managed to maintain its original “fishing village” charm which is in stark contrast to its booming northern and southern neighbours of Cancun and Playa del Carmen, respectively (Figure 1). The Puerto Morelos reef Marine Protected Area (MPA) is located on the northeastern Yucatan Peninsula. It includes a diverse coral community that maintains dynamic growth and provides resilience to natural impacts and disasters such as hurricanes. This MPA is among the first in Mexico to be created through a community-based approach with local stakeholders taking responsibility for the management of the program.

The Queensland Coral Reef Finfish Fishery (QCRFF) operates on the Great Barrier Reef, Australia. It is a multi-sector, multi-species fishery involving recreational, charter (tourism) and commercial sectors. It takes over 125 species of fish, with an annual gross value of product at around $US45-75 M for the commercial sector. This sector predominantly targets coral trout (Plectropomus spp.) and red-throated emperor (Lethrinus miniatus). The QCRFF operates primarily in the Great Barrier Reef Marine Park, a World Heritage Area and multi-use marine park. The Great Barrier Reef Marine Park Authority (GBRMPA), a Federal Statutory Authority, manages the biodiversity and multiple-use aspects of the area, while a state government department, the Queensland Department of Primary Industries and Fisheries (DPI&F), is responsible for the management of fishing activities specifically.

Lessons from the Katnawake Schools Diabetes Prevention Project in Canada

Kahnawake is a Kanien’kehaka (Mohawk) community of approximately 7000 people, located 10 km south of Montreal, on the banks of the St. Lawrence River (Figure 1) (http://www.kahnawake.com). In 1985, 12% of adults aged between 45 and 64 years had documented type 2 diabetes. Moreover, the average age of onset for type 2 diabetes has decreased in this population of people from 59 years in 1985 to 49 years in 1995 (Macaulay et al. 1997).
Type 2 diabetes is a complex disease of multifactorial etiology where genetic and lifestyle factors are major contributors (Macaulay et al. 1997). Moreover, obesity is the most important risk factor associated with the development of type 2 diabetes.
In this context, concerns about the high incidence of diabetes and the perceived increase in obesity among children, encouraged the community to seek expertise from academic researchers to aid in the development of a diabetes prevention program. In response, the development of the Kahnawake Schools Diabetes Prevention Project (KSDPP) was initiated. The long-term purpose of KSDPP was to reduce the incidence of type 2 diabetes through short-term objectives of increasing physical activity and nutritional strategies (Potvin et al. 2003). Similarly, important objectives were to encourage community capacity building, empowerment, and program ownership, while respecting Mohawk tradition and culture.

Learning from a Community Action Plan to Promote Community Health

St. Lucie County is a rapidly growing region on the east coast of south Florida famous for its tropical weather and lush landscape. It is a community that benefits from a strong supporting organisation, the ‘Shared Service Network Executive Roundtable (ERT)’, a group of 24 chief executive policy-makers; elected officials; and leaders from various funding agencies, state and local government entities, and non-profit organisations. The ERTs mission is to create and implement system change that will result in improved outcomes for youths in local schools and in the community (Weiss et al., 2010).

Unfortunately, St. Lucie County is not all paradise. Rates of sexually transmitted disease (STD) and teenage pregnancy are exceptionally high, in fact, much greater than other counties in the state of Florida (Weiss et al., 2010). In 2005, St. Lucie County ranked fourth in Florida for the number of STDs with concomitant HIV infections (Department of Health, 2006). Recognising the alarming increase in the incidence of HIV/AIDS, and teenage pregnancy among the St. Lucie community, a group of concerned individuals decided to take action. Community members including social workers, health educators, and county health department (CHD) leaders, became members of a HIV/AIDS action group, and a teenage pregnancy prevention group (TIPPS-Teen Impact for Pregnancy Prevention and Services) specifically to address the problems of HIV/AIDS and teenage pregnancy in the County. Although equally important, teenage pregnancy prevention was clearly a moral issue while the need for HIV/AIDS prevention was undisputed. Accordingly, the focus of the action plan ultimately became HIV/AIDS prevention.

This case study outlines the success story of a community-based participatory action group taking decisive action against an increase in teenage pregnancy, and HIV/AIDS in St. Lucie County. This group were highly commended for their efforts by state health officials as a direct result of the increased awareness of HIV/AIDS and the need for testing in the community (Copsey, 2009).

This four year research project was carried out in the Scotia-Fundy Region of Atlantic Canada (the Bay of Fundy and Scotian Shelf) between 1999 and 2003. The participating partners included several First Nations and a number of non-native fishing organisations, non-profit organisations and four universities. The purpose was to bring researchers and fishers together to adapt social science approaches to serve the needs of community-based fisher organisations. In particular, the project sought to overcome some of the practical and methodological barriers in relation to participatory research protocols in a way that improved benefits without demanding excessive transaction or information costs. The fisher groups were encouraged to pose and address social science questions and develop small-scale research projects that served to meet their needs and the needs of the wider community.

The focus of this case study is on a small community of 1600 people on the west coast of Vancouver Island, British Columbia. This community is part of a municipality that was historically resource dependent (i.e. fishing and forestry), but attempting to transition to an increased reliance on alternative industries such as ecotourism.

A community-based research collaborative was initiated in 2004 between Malaspina University-College and the District of Ucluelet, which developed into the Malaspina-Ucluelet Research Alliance. The objective of this partnership was to better understand how the transitioning economy might take place while continuing to maintain community held values. The project also coincided with the revision of the Official Community Plan, which included the identification and development of policy and planning strategies for the municipality’s sustainable growth and development. 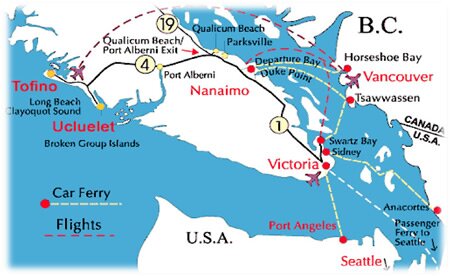 The alliance continues to thrive, having won a range of prestigious awards including several United Nations International Awards for Liveable Communities in 2006 (Malcolm 2007). These awards acknowledge their grass-roots approach to community planning and research, where the community-university research alliance has been lauded as “an example of world’s best practice” (Morphet 2006).